“It may sound odd at first that oral sex can be a woman’s portal to realizing not only her spirituality but also the very force that retards her aging process.”

This following article looks into the amazing healing benefits of oral sex on the physical body. It is an excerpt from this amazing book. The book in its essence takes a look on sexuality from the perspective of ancient Taoism. You might have never looked at oral sex from this perspective. 😉

Oral sex stimulates many of the oral fixations we had as adolescents. It is the most powerful stimulant of the body memory and intelligence in re-creating many of our youthful energies and conditions.

LIFE IS FULL OF ORAL SEX

Nothing has as much influence on our health, and also on our psyche, as oralism does – in all its forms.

In Western psychoanalysis, oralism is considered the first stage of libidinal development, at which time sexual desire is undifferentiated from the desire of food.

Aside from mother’s milk, saliva is actually an infant’s first ingestion of nourishment.

“It is an undeniable fact that body fluids are the initial source of nourishment for the survival of human life – namely mother’s milk and saliva. As infants and children we spend an inordinate amount to time licking things. Almost every object we grasp must first be licked.”

As infants our first sense organ to develop is the tongue, so we judge everything first through the sensations of the tongue. Using the tongue creates saliva, and to infants saliva means nourishment. Hence the frequent occurrence of drooling in infants.

“The importance of the tongue to our health and well-being could not be overstated. The tongue is not only our first sense receptor but is also the last organ to deteriorate after death.”

It may sound odd at first that oral sex can be a woman’s portal to realizing not only her spirituality but also the very force that retards her aging process.

But when we look closely, as this work does, we shall see clearly how these acts and behaviors deeply affect a woman’s entire biological and spiritual natures.

THE HEALING BENEFITS OF SEMEN & SALIVA

The Healing Power of Saliva

Saliva is a body fluid, not excrement – an erroneous view held by many Westerners. Saliva is full of nutrients that benefit the body in numerous ways. In women it can aid digestion, produce weight-loss, heal the skin, restore the teeth and gums, and cleanse the esophagus, to name just a few of the benefits.

The Healing Power of Semen

Semen is likewise a body fluid and it is primarily protein. Its warmth draws fresh blood to where it is applied on the body, acting like an astringent in the generation of new skin cells and tissues. The warm semen simultaneously affect the pigments, called melanin, that lie underneath the skin, keeping the skin and hair healthy. 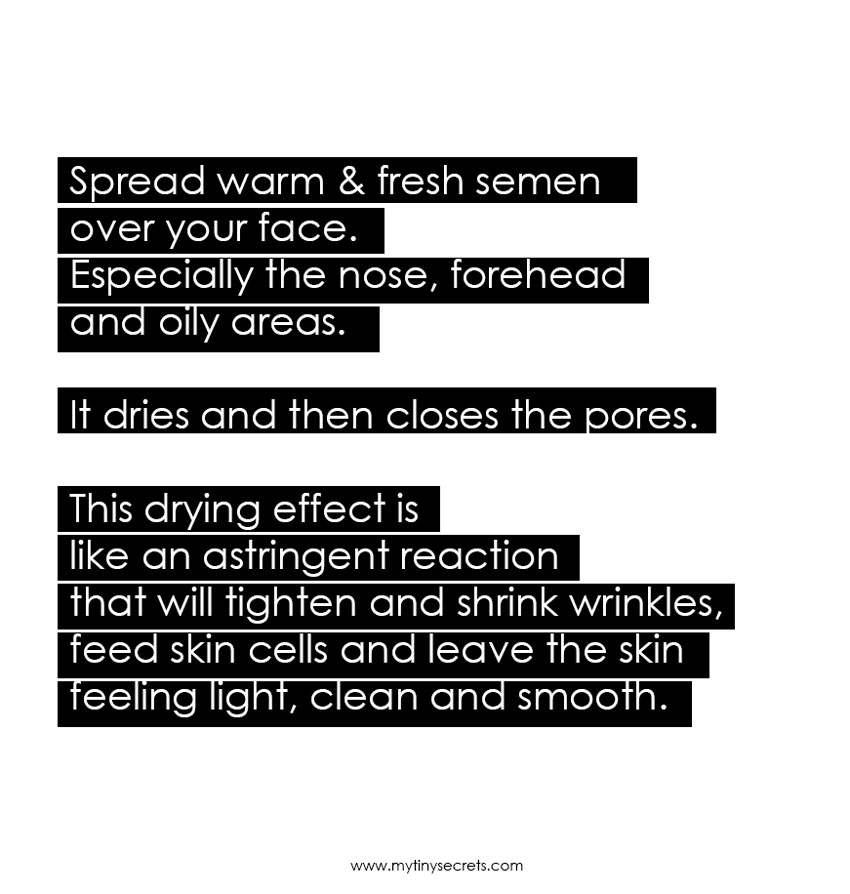 The ancients surely did not know the breakdown of these essential micronutrients, but they did know that semen was without question the very best of skin rejuvenators.

THE 7 MAGICAL POWERS OF ORAL SEX

The activity of oral sex produces and attracts new blood for nourishing the teeth, gums, hair, facial muscles and tendons.

It also enlarges the breasts because of its hormonal effect on the milk glands.

It has beneficial effects on the thyroid gland. When the thyroid is stimulated and excessed women experience a decreased chance of contracting breast cancer and are less likely to experience the ill effects of menopause.

Oral sex exercises all facial muscles, most of which normally never get exercised. The muscles used for sucking are especially beneficial in slimming fatty tissues from the face and removing or preventing wrinkles and aging spots.

The gums are strengthened and cleansed through both the sucking actions and the increased amount of saliva.

Breathing through the nose is strengthened by oral sex, thus creating deeper breathing. Deep breathing is something we all did as children that we lost as we became older and more tense.

I think this is a good moment to also look into this article 😉 > The Joy Of Sucking Cock: 3 Delicious Tips To Help You Savor The Feast

P.s. If you want to read more of such thought-provoking article check out the MyTinySecrets FACEBOOK PAGE