Mahasatvaa Sarita is a Tantra Master and author of two books on Tantra. She teaches Tantra for both couples and individuals in 12 countries around the world, working with a Team of highly skilled co-teachers. She offers Tantra Teachers Training, a 7 level couples training, a Tantra Meditation Retreat and Mystic Tantra Massage Training among many other courses. Sarita is in the Osho Lineage, having lived in his community in India for 26 years. She received much personal guidance from Osho in the powerful alchemy of Tantra as a spiritual path. She has been teaching Tantra in India and Europe since 1990.

The Yoni of the Woman Is A Portal Into Ecstasy & Beyond

The meaning of “Yoni” in Sanskrit is “Sacred Place” (= female genitals). This word is fast coming into vogue as women learn to reclaim pride in being a woman. Many women are now aware that it is not enough to achieve the same status as men in the marketplace.

A new dawn is coming where women are discovering that it is our birthright to be Goddesses, ‘she who knows the secrets of discovering heaven on earth’.

An important part of the revolution from woman to Goddess is the Yoni.

By understanding the attributes of the Yoni, we simultaneously discover true empowerment.

Female Sexual Anatomy Is A Miracle

It is unfortunate that even now, many women still believe the erroneous statement made by Freud that infantile women need clitoral stimulation during sex, while a mature woman orgasms from penetration alone. He made this statement without any scientific study to back his claim.

Later during the 50’s and 60’s Masters and Johnson proved him wrong through their lab studies of women’s sexual response.

And recently, groundbreaking work in the lab has been and continues to be done on many aspects of female arousal and sexual activation, in the genitals, and the body as a whole, including the brain.

Woman’s sexuality is holistic, and includes an entire network of responsive tissue, nerves, glands and hormonally based emotional states.

There are 3 main erogenous zones for female sexual arousal:

In addition to this, there is a nerve in the sacrum which functions as the ‘trigger’ for genital orgasm.

This delicate network of nerves and erectile tissue is linked directly with the glandular system of the brain and is also connected to nerves and other communication systems all over the body.

The Clitoris Is Just The Tip Of A Giant Iceberg

The clitoris we see or touch on the outside of the body is just the tip of a large network of pleasure oriented erectile tissue.

In the clitoris are 3-5000 nerve endings devoted only to the arousal of ecstasy states.

The clitoral network has bulbs inside the body, arms that hug the vagina from inside the body, as well as the vulva (outer lips and inner lips) and a hood, which sits on top of the clitoris, linked to the vulva. All of this goes into erection when the woman becomes aroused, making her hypersensitive and lubricated, ready for potential penetration.

As erection happens, her vagina lengthens and balloons, adapting itself to receive the Lingam of her lover (In Sanskrit, the word Lingam means Pillar of Light, symbolizing the male genitals).

The G-Spot Holds Memories Of Either Pleasure Or Pain

The G-spot that is located just inside the entrance of the Yoni is the end of a bundle of nerves linked to the clitoral network.

When the woman is aroused, the G-spot becomes slightly swollen and more sensitive than it is in its passive state.

Energetically, it is connected to the Womb, being an acupressure area, which holds memories of either pleasure or pain in regards to the woman’s sexual and birth experiences.

When energy is liberated in this zone, a woman can discover the blessing of Amrita (also known as female ejaculation).

The Taoist Tantra masters have named this area, ‘the Palace of Yin.’

It was thought most auspicious for a man to be able to drink the fountain of Amrita (meaning nectar in Sanskrit and in Chinese, translated as Moon Flower medicine). 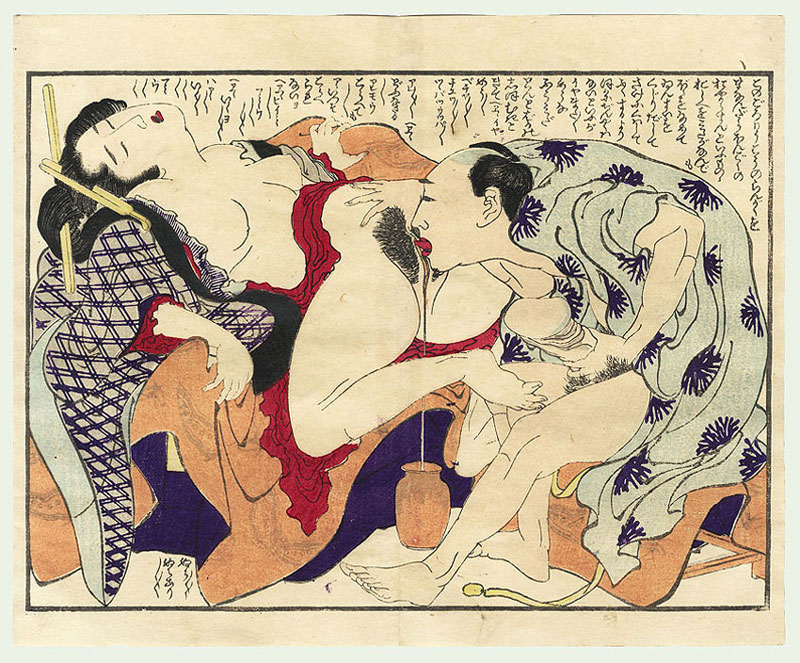 The Cervix, The Portal of the Goddess

The cervix is a highly sensitive erogenous zone, which offers women the possibility to open to multi-orgasmic states and to a deep experience of her Goddess nature.

The Yoni has its own masterful intelligence and the portal of the cervix will not reveal its full potential unless the sexual arousal between the male and female is of a high enough calibre.

When the conditions are right for a deep sexual union, the woman will be catapulted into ecstasy states which cause her brain to shut down its rational aspects. In these moments of deepest surrender, she experiences divinity. She knows herself to be the Goddess.

A Tantric sexual secret is hidden in the cervical union of Lingam and Yoni.

When the tip of the Lingam kisses the cervix in just the right way, an amazing transmission and transmutation happens.

The tip of the lingam transforms from giver to receiver and begins drinking the offering of amrita from the womb. The cervix becomes the giver, offering a profound transmission of the power of Shakti to her Shiva.

This in turn gives rise to what is called ‘the Tantric Circle’ wherein male and female become one spinning wheel of yin and yang and may forget who is the male and who is the female. This state of oneness is what is sought in each sexual meeting, whether the lovers know it or not.

The Sacrum: A Trigger for Orgasm

In the sacral area are many acupressure points linked to the glandular system of the brain.

These points are also connected to nerves linked to brain, spine and genitals. One such nerve in the center of the sacrum functions as the trigger for orgasm once full arousal has happened.

If someone has stagnation in his or her sacral area or lower spine, it may be difficult to achieve orgasm. While lovers begin engaging in sexual play, it is very helpful to include massage of the sacrum as a way of opening up orgasmic potential.

When a woman is aroused only locally directly on and around her outer clitoris, she may have a more localized and less fulfilling orgasm.

If her arousal spreads deeper inside her clitoral network, and she attains full erection of all erectile tissue of her genitals, both inner and outer, she will have more ecstatic orgasms, which are deeply fulfilling.

For the portal of the Goddess to be opened within and for the woman to experience full body orgasm, there is a protocol to follow.

The clitoris has nerve endings that arrive to this erogenous zone from all over the body.

For full arousal to be experienced, the woman will need full body activation. She has the potential for such a level of excitation that her entire body will feel as if it is one giant clitoris.

This happens when all the nerve endings of the clitoris are awakened in their connectivity to all other parts of the body, including the glandular system of the brain.

One of the findings of sex researchers is that for a woman to become aroused fully in her genitals and ready for penetration by a Lingam, she will need minimum 20 minutes of all over body connectivity and touch.

This could be through caressing, massage, hugging, or kissing, and other forms of all over body stimulation.

This finding is interesting considering that in ancient Tantra Taoist texts, it is stated that a man needs to spend time arousing the woman through artful means, and should not attempt penetration till she begs him to with tears in her eyes! In general, a slow, tender and teasing build up of arousal works very well for many women.

It has also been found that tender loving words can greatly excite women, and that as part of the awakening of orgasmic potential, it is very helpful to have a romantic atmosphere, i.e. soft lights, soft music, wonderful aphrodisiac scent, and other sensorial activations.

Allow sounds to possess you beyond conscious control

Once the woman begins moving into an altered state through her sensual and sexual build up, it is very helpful if she allows sounds and movement to possess her, beyond conscious control.

A friend, Robert Silber, who has studied women’s sexual response extensively through Yoni massage, has informed me that women’s capacity for orgasmic states is directly linked to how vocal she is able to be while experiencing pleasure.

The Woman’s Body is a Musical Instrument

The woman’s body is a musical instrument devoted to pleasure.

The wise lover will first tune the instrument, and will then begin playing the raga of sexual fulfillment, with himself in the role of master musician.

The art of Indian Raga music offers a great teaching in the arts of sexual love through how it moves from tuning, to slow buildup and from there to orgasmic splendor, where the musician and the instrument become like lover and beloved, finally merging into one.

Deep Down, Each Woman Longs For Complete Surrender With Her Beloved

Even worse than that is sexuality, which is programmed through cultural inhibitions leading to a sex act, which is no more exciting than a sneeze.

Deep down, each woman longs for complete surrender with her beloved. She wants to let go and lose control, being possessed by love to her intimate core of being.

The Yoni of the Woman Is A Portal Into Ecstasy & Beyond

Women and men cannot feel fulfilled unless and until we have experienced the splendour of fulfilling sex.

I have heard Osho say that people go on changing partners because deep down we are searching for someone with whom we can experience the most ecstatic orgasm. In my years working with couples and individuals, I have found this is true.

We may mask our desire behind other flowery terms, but deep down the search for fulfilling sex is of paramount importance.

The Yoni of the woman is a portal into ecstasy and beyond.

The more at home we are with our capacity for orgasmic ecstasy, the easier it will be to allow ourselves to be catapulted into a merging with universal consciousness. As we enter total orgasm, simultaneously the supreme wisdom of our Goddess nature is revealed.

I am sharing this because I know it through my own experience. One may think that perhaps this is a unique gift I have experienced and that it is not possible for all.

However, my research in working with thousands of women and reading much literature on the subject reveals that such experience is the birthright of every woman.

The sexual revolution will not be complete unless and until each woman has experienced her Goddess nature.

Vagina by Naomi Wolf, Masters of Sex, A Biography of William Masters and Virginia Johnson, The New Hite Report by Shere Hite, The New Sex Therapy by Helen Singer Kaplan, Tantra: The Art of Conscious Loving by Charles and Caroline Muir, Osho’s discourses and books on Tantra

This will also help open a woman up to deeper and/or multiple orgasms: