Home  »  Intimate Health   »   The 7 Natural Birth Control Methods Your Doctor Would Probably Never Tell You About (.. Because Money Rules The World)

Emily Nature coaches women on health and relationships so they can live with pleasure, power, and vitality. She loves seeing women blossom, writing sensuous poetry, whipping up wholesome delicious concoctions, and communing with nature.

You may want to look into natural birth control methods if you’re a woman in your reproductive age and are in a long term committed relationship, where both you and your partner are healthy, safe, and have been tested for STIs.

Synthetic hormones in the contraceptive pill and IUDs have been proven to cause breast cancers, blood clots, weight gain, cramping, loss of libido and an inability to orgasm. Barrier methods such as the condom can prevent a feeling of pleasure and intimacy between both partners.

Fortunately there are natural birth control methods that are non-hormonal, non-mechanical, do not involve implants or artificial devices and don’t create barriers between you and your partner.

(Note that you should always practice safe sex by using condoms with a partner of unknown sexual history or who has not been tested for STIs. The methods described below prevent pregnancy but do not protect against STIs.)

Here are the 7 ways to natural birth control

Let the man do it! If you and your partner plan to have a child sometime in the future and vasectomy is not an option right now, the following method can have him temporarily sterilized for a few months. It does however require willingness and responsibility from your chosen man.

This method involves bathing or submerging the testicles in 116F (46.7C) water for 45 minutes a day for 21 days. The water is just below the pain threshold so he can physically withstand the sensation of intense heat. Remember, you need to continue adding more hot water during the process to keep it hot enough for the entire 45 minutes.

After the 21 days the man becomes reliably sterile for the next 6 months. Submerging the testicles in 110F (43.3C) water (less hot) for 21 days will also result in sterility for the next 4 months. When the time is up, repeat the process until you want to conceive.

This works based on the fact that sperm cells do not survive well under heat; in contrast, they need to be several degrees cooler than the body temperature, hence, the testicles hang outside the body. In fact, sperm cells die at 95F (35C), so this method kills sperm for an extended period of time.

“This method dates back to the time of Hippocrates, and it’s been shown to be completely effective over a ten year period with a group of males in India, who were also easily able to have children when they stopped.” – Kim Evans, from her book Cleaning Up! The Ultimate Body Cleanse.

In traditional South Asian and Southeast Asian cultures eating a teaspoon of papaya seeds a day has long been proven to be an effective contraceptive. It can cut a man’s sperm count to zero and is safe for long-term use.

This method takes three months of a daily intake of papaya seeds before it is effective. One of the great benefits of this method is its reversibility – if the man stops taking the seeds his sperm count will return to normal.

For an easy-to-consume drink blend a teaspoon of papaya seeds with sweet fruits such as papayas or bananas.

There are many ways to approach this method but all have one thing in common; knowing your ovulation cycle. Using this method a woman will need to watch for the signs that indicate ovulation has occurred or is about to occur. The beauty of this method is that it has the woman stay in tune with her body, rhythms, cycles, and her subtle changes.

Most women’s cycles are between 26 to 32 days. You are only fertile 3-4 days during your cycle. The optimum days for fertilization are the 2 days before ovulation, the day of ovulation, and the day after ovulation.

This means that for most of your cycle you are not in a fertile period and there are only a few days when you are able to conceive. Therefore, it works to your advantage to track, chart, and be intimately aware of your own cycle so that you know when you’re ovulating and are in your most fertile period. Then you can choose to have no sexual intercourse or use some forms of barriers during those days.

Wild carrot seeds (Daucus Carota), also called Queen Anne’s Lace, have been used for centuries as a contraceptive. They’re completely safe, natural, do not disrupt your cycle, and may even be growing in your backyard.

During ovulation days take the first dose of wild carrot seeds within 8-24 hours after intercourse, and then up to 2 more times afterwards; this equals a total of 3 times within a minimum of 24 hours and a maximum of 72 hours. You can chew the seeds, take the tincture, or steep in hot water and drink as a tea.

Wild carrot seeds that are consumed during the time of ovulation subtly increase your progesterone level for the 72 hours that the herb is introduced. When you stop taking the herb the progesterone level drops and then sends a signal to the body to let it know that the fertilized egg should not be implanted.

For thorough information on studies and use of wild carrot seeds do check out Robin Rose Bennett, the top master herbalist in the US.

The basal body temperature (BBT) method is based upon the fact that a woman’s temperature drops 12 to 24 hours before an egg is released from her ovary and then increases again once the egg has been released. The temperature difference is not very large; it is less than 1 degree F (0.5 degree C) when the body is at rest.

To use this method take the basal body temperature (your temperature upon first waking) every morning with a specially sensitive and accurate “basal” thermometer, and carefully note the daily temperature variations.

This method involves tracking changes in the amount and texture of vaginal discharge which reflect rising levels of estrogen in the body.

For the first few days after your period there is often no discharge. Your vagina is dry. As estrogen starts to rise there will be a cloudy, tacky mucus. Your vagina feels sticky to the touch, but not truly wet. When ovulation is near, the discharge starts to increase in volume and becomes clear and stringy. The vagina is wet and moist. When you’re ovulating and most fertile the discharge is similar to raw egg white, very slippery and stretchy. The vagina feels lubricated. When ovulation’s passed there’s either tacky, cloudy mucus or no discharge. 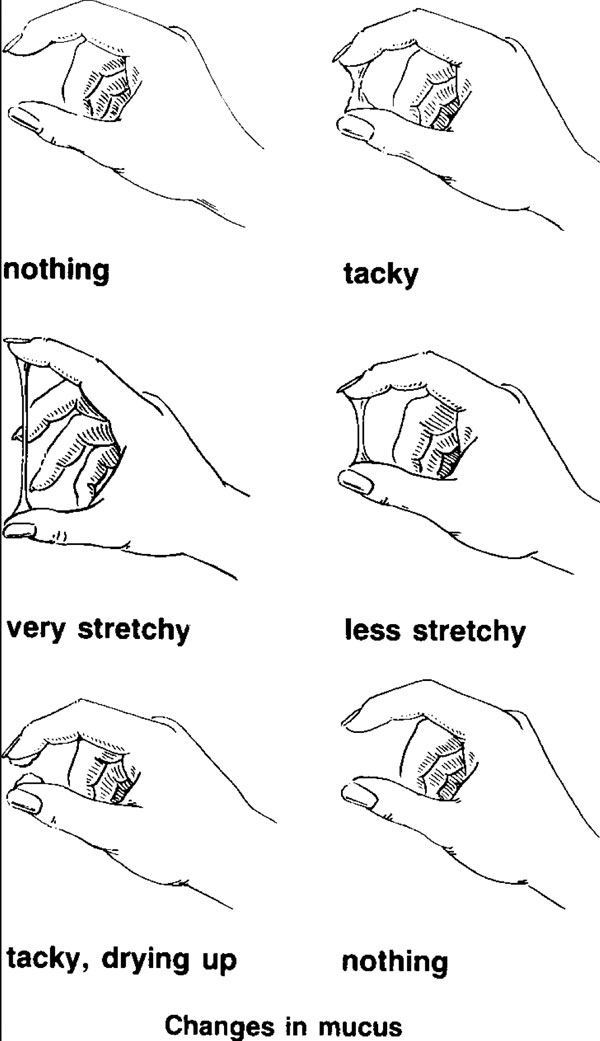 This method, combined with the Basal Body Temperature method can have a success rate as high as 98%.

Ovulation prediction kits are designed to measure the amount of hormone in the body – hence they can predict when a woman is most likely to ovulate.

Begin testing your urine 2-3 days before you expect to ovulate, based on your previous monthly cycles. Urinate onto a test stick and the amount of luteinizing hormone will be indicated by a color change.

The intensity of the color is proportional to the amount of luteinizing hormone in your urine which increases 20-48 hours before ovulation and can be detected 8-12 hours later.

The saliva kit has a hand-held magnification lens that allows you to check the pattern of your saliva. Hormones filter into saliva and during fertility, a pattern that looks like a fern can be seen in saliva under a high powered magnification lens.

Just prior to or during fertile days, estrogen levels in saliva will typically dry into a fern pattern just like cervical mucus. During non-fertile days only random and shapeless dots will be visible.

Disclaimer: As with all contraceptive methods you should consult a medical professional if necessary. My Tiny Secrets and its author take no responsibility for any negative consequences you may experience from information in this article.